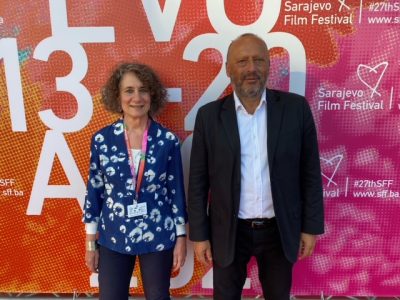 We had a good screening in Sarajevo, with an impassioned introduction of the film by the director of the festival, Mirsad Purivatra, and a lively post-screening discussion, led by a very perceptive and empathetic moderator.

An interview by Nina Rothe at MIME with director, Maysoon Pachachi and producer Talal Al-Muhanna, on the eve of the film’s premiere in Sarajevo. Read it on MIME.

An interview by Marta Balaga for VARIETY about OUR RIVER…OUR SKY with director, Maysoon Pachachi & producer, Talal Al- Muhanna. Read it on Variety.